Days ago I was offered tickets to the Seahawks game.  While in a state of blur I of course said, “hell yes!”  Heavy sleep, interrupted by the 7am alarm Sunday, made me second guess my decision.  You see, I have a pattern of overexerting and crashing.  By 7:12am I knew I my decision to go was crazy.  I rallied and managed to leave the house by the planed departure time of 8am.

Me in the driver seat and SW as copilot we made great time to Centurylink Field thanks to the WRX. 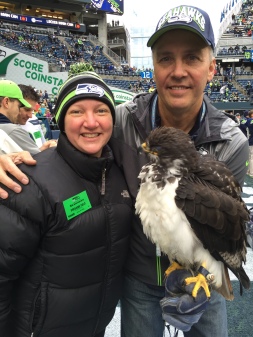 Pre-game field passes and tickets were generously given to us by Chris Draft and The Chris Draft Family Foundation.  It was pretty darn awesome. Standing on a field with 67,000 seats surrounding you was quite a jaw dropping experience.  Knowing that in an hour each seat was to be filled with a shouting fans made me shiver.  We got to watch the players warm-up before the game; sideline view proven again to be top-notch.  Such large strong men that are damn fast!  And, some had pretty swanky dance moves.

Making it to our seats before kick-off was a major accomplishment.  I managed to walk up countless ramps and 30-something stairs.  Reaching the chair gave me the feeling like I, a one woman team, had personally won the Super Bowl, elated and exhausted.  Assigned tickets placed me next to Lung Cancer Survivor Jessica Steinberg.  As always, we had a hoot together.  Thankfully she had her LUNGevity blanket to keep both of our laps warm. 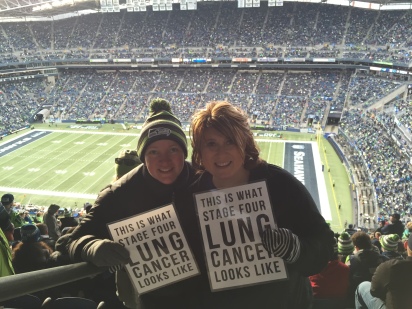 Seahawks ended up winning 20-6.  (Go Hawks!)  The game was good.  The crowd was entertaining.  Traffic was manageable.  My hot apple cider was free. Successful!

I got us and an order of Thai food home at a reasonable hour.  We betrayed one of the few House Rules.  We filled our bellies in bed while Guardians of the Galaxy gave us something to zone out on.

It was a great way to spend a Sunday.  Thanks again Draft Foundation!

I'm Kim. I've got advanced lung cancer. It sucks.
View all posts by kimmywink →
This entry was posted in Uncategorized and tagged Friends, Living, Staging, Walking. Bookmark the permalink.

2 Responses to Cool Day in Seattle